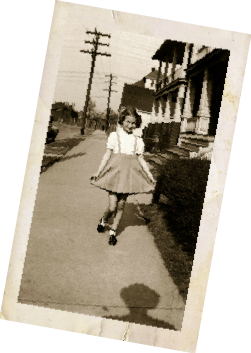 What happened to that little girl? Was she holding hands with her boyfriend in some other snapshot? Would she pose beside her beaming husband in front of their new home? Could she be the loving grandmother in a family picnic scene? Or would her life end sadly, badly, even tragically? All we’ll ever know is what we see, a young girl caught in the warm glow of evening light for a moment that will last forever.

I put down my takeout coffee and examine the snapshot closer. The little girl reminded me of someone, but who? Finally, it came to me. She was reminiscent of the young boy in the Henri Cartier-Bresson photograph, Rue Mouffetard. The young Parisian proudly holds bottles of wine bottle in each arm while marching down the street as admirers his own age look on. That photo can be found on museum walls throughout the world. But this little picture of the proud girl was right here in my hand. It was among dozens of other snapshots in a shoe box at a flea market in Royal Oak, Michigan. Its price was a dollar.

How can an ordinary snapshot rival the photograph on a museum wall?

Many of these snapshots remind me of the photographs of great artists, like Robert Doisneau, Walker Evans, Diane Arbus, Dorothea Lange, Mike Disfarmer, Vivian Maier, and the aforementioned Henri Cartier-Bresson. But these snapshots are artless, in the best sense of the word. They make us think, then wonder, then imagine. They make us feel something. There's a word for that. It's called art.

An accidental portrait of mid-twentieth century America emerges from this modest collection of snapshots. I'm pleased to share them with you.

She's a young girl with a big smile, skipping down the street without
a care in the world. Okay, maybe the smile is a bit forced, a concession   to the camera. And now that I looks closer, she's not really skipping. She's posing, proudly showing off her pleated skirt. Is the skirt new? And are those new shoes?

Judging by the light and shadow in the sepia toned print, it's late afternoon. Sometime during the late 1930's or 1940's. A shadow looms in the foreground, a woman, her mother or maybe an aunt. Was her father standing just out of the camera's view? Or was he one of the smiling soldiers or sailors seen in so many photo booth pictures, about to go off to war? I'm hoping he's right there. That's what I want to believe. I want this girl to grow up with a father.